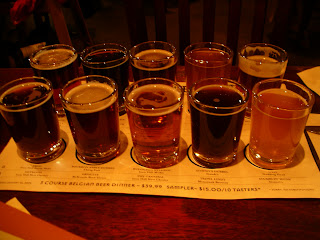 After tuning up the night before at Sly Fox, then ramping up on Saturday with a stop at Capone's, Vidalia Marketplace, and Beer Yard (not to mention balancing a visit with my grandmother), it was off to Iron Hill's Belgium Comes To West Chester event.

This year, our approach was to have a table for dinner. There we could dip into the samplers without having to balance multiple glasses per hand or fight our way to the bar to get them. Suffice to say, this approach worked very well. A citrus shrimp appetizer and two personal pizzas later, our first sampler of the A-flight was absorbed quite nicely by the food base. Then, we figured we might as well get started on the B-flight sampler while still seated at the table. Plus, we had some visitors who couldn't secure their own table, but fortunately brought their own samplers as they chatted with us. 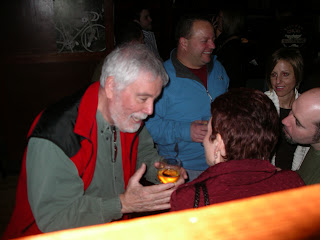 So far, things were all working out quite nicely. We paid our table tab, grabbed our last couple of glasses, and joined the back room full of brewers and fans and had a few more treats. I lost count of the number of brewers and other noteworthy glitterati milling around this who's who event. This guy (by the way, can I sneak in a plug for his spiffy new, more frequently updated now-this-thing-really-is-a-blog?) said something about blackout stage, but I didn't see it. After all, he was full of positive energy, compliments, and general good cheer. He refers to Cruella, but during the last hour he had only glowing things to say about her personality, generosity, and driving skills. Or, maybe it was the Quadfather talking.

After the first keg kicked before 6pm, beers were being erased off the board at a fast and furious clip. By 7pm, the entire first round had disappeared and some of the second round started dropping off as well. And, around 8pm, all but 4 had been drained. In addition to the 20+ special event beers from the back bar, IH also had their Bourbon Quadfather and (was it 2004 & 2006?) Grand Cru at the front bar to keep the folks who didn't brave the back room feeling special.

My personal winners for the night? The return of the Iron Hill FE10 (roasty, hint of burnt smoke?); Sly Fox Saison Vos (think I've said my piece on this beer multiple times over in the past; nothing's changed); IH Rudolph's Revenge (wasn't sure how the hops would work; question it no longer); and the IH Fred (no questions asked here either, a sure-fire sour winner that I'd love to see more of during the year). Riding in the sidecar included Harpoon Wild (just like last year, it was wildly popular with the masses); Stewart's Stumblin' Monk (smooth medal-worthy Belgian); and the, hm, let's pick one more...Manayunk's Tripel Lindy (just a nice, smooth drinking and slightly dry tripel-style). 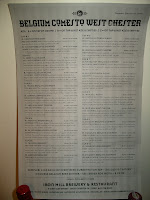 Oh, and a last note. It took me a week, and a peek in the brewery door just the other day while harassing the brewers, to be reminded that Jean surprised us at the end of the festivities with a glass of the B-wood (described as Heywood's brother). It's quietly morphing inside a wooden barrel in the brewhouse. Wish I would've made a note or two about it, because in the aftermath of the various other beers....well, I already said it took a week and a visual clue to be reminded of its introduction to me. 'Nuff said!

Thanks again to the IH crew, another A+ quality event.
Written by Bryan Kolesar at Monday, February 04, 2008

I am honored that, to sum up such an august event, you chose to use photos of a bunch of glasses, a menu sheet and me.

Not quite sure what message that sends, but I am also comforted that I was still standing when you chose to click the shutter (do they still call it that these days?).

A great event, to be sure. And Cruella deserves every nice thing I said about her. Designated drivers are god's gift to the drinking class.

It looks like things were very well organized this year. Although it was a great time last year and the selection was pretty extensive, it was a bit crazy trying to get beers. The a, b, c system seems like a good idea.