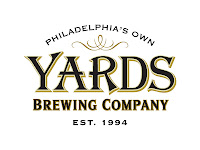 PHILLY BEER WEEK INDEX @ THE BREW LOUNGE
Yards is a Philadelphia story. I'd compare them to Rocky, but I'd probably get lost in the analogy along the way and find myself in a hole from which I could not dig out! But, make no mistake. Yards started as the little guy from the Manayunk and Roxborough neighborhoods and grew into a brewery with beers that are often referred to by outsiders as "the Philadephia beer." Along the way, they took the brewery into Kensington and became even more of a bonified neighborhood brewery by reviving the brewing ghosts of Weisbrod & Hess.

Back in the 90s, I knew the beer (personally, I say) but not so much the people behind Yards. Late in the 90s around the turn of the century, I began to follow the people and places more closely and finally visited the Kensington brewery for the first time just a few years ago. The passion for the beer shown by both the brewers and the consumers was always palpable during visits to the brewery. Rich Wagner's regular presentations about the history of brewing in Philadelphia added yet another element to the allure of Yards Brewing.

For some, after the management split became official in 2007, there were fears of possibly losing a piece of Philadelphia brewing history. Instead, it appears that we will end up gaining instead of losing. I don't doubt that some of this passion will carry over to the new location of Yards on Delaware Avenue. And, during Philly Beer Week, if you don't find yourself drinking a Yards beer at least once, then you must not be drinking beer. Tom and company are making sure that the Yards name will be in front of the beer-loving masses at every turn. Just check out the list of events below.

As you ready yourself for Philly Beer Week 2008, study up on some background notes on Yards Brewing Company and consider yourself lucky to be part of such a vibrant and rich beer region that PBW 2008 will celebrate.