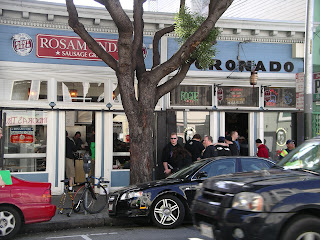 Over 50 barleywines available on draft, 3 come out on top. The judges had their say and placed the Lagunitas, Stone, and Firestone Walker in the top three spots, respectively. Even a keg of Nodding Head Hoptimus Prime showed up from Philly. 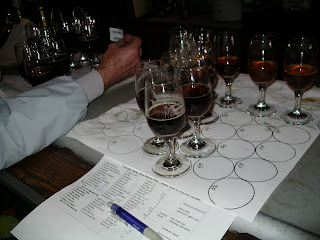 By the time we checked into our downtown hotel, took a breather, and found a cab ride to the Haight, the early birds had found their seats and secured tables. We first stopped at Rosamunde next door for some sausage sandwiches to lay the base.

Placemats were laid in front of those who wanted to tackle all 55 barleywines. Other tricks for getting barleywine bang for the buck (well, you didn't save any money, just time) was to bring your own sixpack holder for carrying the tasting glasses...as demonstrated in the picture by Logan, of Three Sheets "fame." 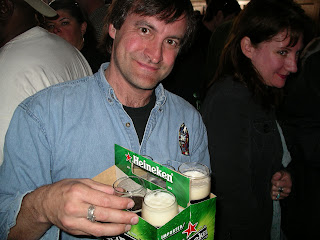 There's a whole slew of pictures from this past weekend. I'll get them all up with some more detail and out to you after arriving home. Jay's already got his batch of pictures up for you to check out in the meantime.

More carousing ensued; check back later for more stories from Toronado, Magnolia, and 21st Amendment on Saturday and the weekend topper on Sunday, the Celebrator 20th Anniversary Party in Oakland.
Written by Bryan Kolesar at Tuesday, February 19, 2008

That Logan just seems to turn up everywhere.

I followed the link to the pictures on Jay's sight and drooled at the sight of a 3 litre bottle of RR Toronado 20th Anniversary. Yum...