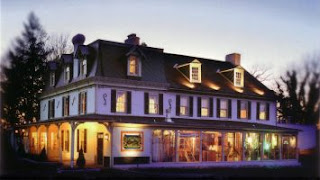 Which is more interesting at the General Lafayette Inn & Brewery in Lafayette Hill, PA? Feeling like an American soldier or colonial 200+ years ago while sitting at the bar? Or wandering throughout the building and property, feeling the history oozing from every nook and ghosts drifting around each corner? Anyway, you look at it, the General Lafayette brings together history, charm, good people and beer.

Brewmaster Christopher Leonard and family are going into their fifth year of ownership at this local gem situated just outside of Philadelphia's northwestern city limit. While the brewery doesn't bottle (not yet), their beer is distributed on draught in limited quantities to local beer bars (TJ’s, Drafting Room, Brigid’s, Monk’s, Chaucer’s, Capone’s, Etc.). They do attend local festivals and host their own; giving craft brew fans a chance to sample some of the Delaware Valley's most interesting beers. Or, if you need yet another excuse to head to Lafayette Hill, brewer Russ Czajka hosts a homebrewer club meeting.

As you ready yourself for Philly Beer Week 2008, study up on some background notes on General Lafayette Brewery and consider yourself lucky to be part of such a vibrant and rich beer region that PBW 2008 will celebrate.