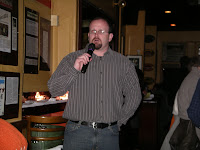 It probably is prudent to begin with apologies to Jack for whom this should in no way be construed as 'rubbing it in'. The adventure to my first Monk's Dinner of the year 2008, a dinner featuring Tomme Arthur's non-incidental beers of Lost Abbey, was highlighted by one of the smoothest trips ever into Philadelphia. That is, on one of the worst weather days ever for a Monk's Dinner. (I won't bother to retell the weather story...read Jack's comments on the topic and you'll get the idea.) How did this all come to be? Funny you should ask...

I left my office desk in Exton at 5:23pm. Drove east on business route 30 to the Paoli train station where I met the scheduled 5:50pm Amtrak train. It was 3 minutes late, but I was in the station by 5:40pm, so no worries there. The train sailed into Philly's 30th Street Station with no delays whatsoever. Actually, arrived approximately 2 minutes early. I high-stepped it up to the next arriving Septa regional rail line, which was just shutting its doors behind me as I hopped on (it's a free ride through Center City from 30th Street Station to Market East Station (a somewhat known secret). Disembarking at Suburban Station, thinking better about ascending to Market Street, and instead walking underground all the way to 16th and Locust streets (an even lesser known secret), I managed to stay dry from the elements in the nasty out-of-doors and arrived at Monk's front step at 6:47pm.

That makes for a trip of approximately 84 minutes from desk to glass-filled hand at Monk's. Oh, the first beer that was thrust into my welcoming hand? A 1999 Sierra Nevada Bigfoot. Sorry, I guess now I've rubbed it in.

On with the show. As reported elsewhere, the dinner and the show was fantastic. Since I'm boppin' my way from southern California to the Bay Area for a weekend of beer ranging from Strong Beer Month, to the Toronado Barleywine Festival, to the Celebrator Beer News 20th Anniversary party and countless other stops in between, I'll need to exercise some brevity in my comments. So, following is a course-by-course listing (not coarse) with random notes (somewhat coarse) for your enjoyment.

Oh, the only drawback of the evening. Returning to the Paoli train station to find my car encrusted in a 1/4" of thick ice and the parking lot in a sheet of slick ice. The plow guys were kind enough to drag the snow and ice from around the car so that I could get around with falling on my tokus while cleaning off the car. Then, I skated home to get a few hours of sleep before my early morning flight.