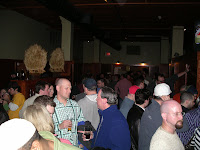 Belgium sure gets around. Cooperstown, Boston, New York City, and West Chester too. Iron Hill hosted an event this weekend that has set the bar very high for the remainder of 2007 for all other beer gatherings and festivals. Can I get a 'giddy-up'?!

It's really a shame that so many BAs gathered yesterday at General Lafayette, because most of them missed out on a spectacular lineup of Belgian-inspired brews and industry folk. I lost count of the "in-the-biz" folks somewhere around the time that I lost track of how many different three ounce samples that I enjoyed in addition to the ones that I seemed to continuously handed to me by others to try. Although, to their credit it sounded like a quality event and a few of them did stumble their way down to Iron Hill. Some even had a mini-bus driven for them...smart! 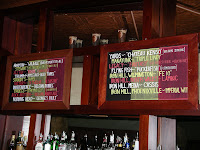 From Stewart's in Delaware to Triumph to the north and further west to Legacy, many local brewers were represented. Even Manayunk came in with a surprise hit. Just check out the board. The host Iron Hill (Chris Lapierre) also chipped in their Quadfather and The Cannibal.

Most crowd-perplexing: Iron Hill's (Media) Cassis - Bob Barrar scored a big-time hit with some but left several others saying, "Holy Barnyard!" Certainly, if you haven't been there before, it's a whole new level for you.

Most suited for the smallest sample glass: Triumph's Applejack (just think apple brandy and alcohol and you've got it nailed, phew!)

Ones I skipped (cuz I gotta be responsible and stop at some point!) FE10, Imperial Wit, Mad Elf, Belgian Dubbel
Written by Bryan Kolesar at Sunday, January 28, 2007

Jackie (My wife) and I took her parents to the event and grabbed dinner as well. We showed up early and were able to score a booth near the back bar where they were serving the belgians. Even though we were close to the back bar it still took longer than normal to be served beers. Long wait aside, we were still able to sample the majority of the brews while eating dinner. The back bar also had a big spread of various different cheeses, of which names I have no idea, since they were not labeled.

All in all we had a great time... I hope there will be more events like that soon! Its great to live in an area so rich with beer culture!

Couldn't have said it better. It was good to see your crew too! You had nice seats in that you could feel the buzz of the room, without needing to fight for standing or bar space. I'm sure that you all had a great time with the beers you ordered. Probably kept you from getting too loopy :)

You're right on, this is such a diverse and rich beer region. We're spoiled and I don't think we take it for granted. Iron Hill continues to impress with quality brew, outstanding gatherings....all while continue to grow their empire!

Any other Iron Hill Mug Club members know when we can get our 2006 mugs? I think they usually have a get together of some sort... but I have not seen anything scheduled, and most of the servers I have asked have had no idea.

My favorites were Flying Fish Puckerfish, Iron Hill's Cannibal, and Triumph's Applejack. I finished those samplers off.

Beers I had a sip or two of: Imperial Wit (wish I had more),The Quadfather (complex and tasty), Harpoon's Wild Ale (enjoyable, I don't think I have ever had a beer quite like it), Legacy's Fantasy (I should have started out with this one, the flavor was a little lost after drinking Stout's Triple), Iron Hill's Flemish Red (I liked the sourness, but there's no way I could ever drink a whole pint).

My first sip of the Fe10 I thought was fabulous clean, little bit of fruit, effervescent, but then after a few more sips the beer started to taste a little chemically.

It was a great event. Our way out the door we had to stop by the bar and pick up my parent's empty growler. I was standing by a man and a woman and she had offered the guy a Victory sticker. He asked what VBC stood for, she didn't know. I chimed in with "Victory Brewing Company". He asked me if they had a cycling team, I said yes and that they were also doing a trip to Belgium this year.

He got up from the bar and the woman sat down. She asked me if I worked for Victory. I said no, my husband and I are just big on beer and we have friends that run this blog called Brew Lounge. She replied back with an "OH Yeah, I know that site!". I never got her name, but she's the wife of one of the brewers (maybe the head brewer?)at Yards.

Did you find it tough to have soo many beers in one event? Especially when you happen to hit a big beer early in the event. That tends to shred your palate and taint the impression of other beers.

I'm getting the feeling that I missed out by not being there.

At least a bunch of you are sharing with us!!!! Thanks Bryan, Jeremy and Applejax!