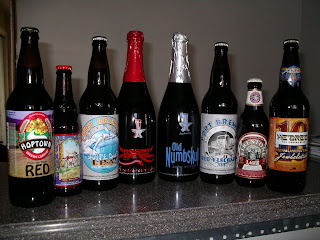 I don't know much about downtown Los Angeles, but from this past trip and a bit of research, I think it's safe to say that the out-of-towner staying downtown is generally out of luck when it comes to finding decent beer, especially decent beer to take home. Case in point, I went out to Pasadena in order to find this treasure trove of beer that I brought home with me on this most recent trip to California.

The funny thing (or not, really) is that I would have figured that downtown LA would have some sort of decent beer scene. But, other than Bonaventure Brewing (a so-so review is forthcoming) and Casey's Irish bar (a separate brief blurb is also in the works), there is nothing to speak of in downtown.

Seriously...liquor/wine stores on the street, nada...specialty beverage spots inside of hotels, zippo...draft/bottle lists at hotels, bars, restaurants, hurtin' for certain. So, since my goal was to track down some Alesmith, Port Brewing, and Firestone (all not available in PA), it was off to Pasadena I went...and I scored at BevMo :) In addition to those three, Hoptown, He'brew, and New Belgium also came along for the ride.

To round out the trip, I spent the last couple of hours at the Four Points Sheraton by the LAX airport, where anyone (anyone!) can find a brew to their liking. I'll post separately on this as well, but as a bit of a teaser let's just say....Racer 5 on tap, Old Rasputin too, Houblon Chouffe in a 1.5 liter bottle, 6 of the 7 Trappist Belgians, and so on. Many, many quality bottle from which to choose.

So, in the end, all of the bottles made it home safely in one piece. I suppose another successful business trip and beer hunting in the books. Unfortunately, I also learned the sobering truth about downtown LA. Consider yourself warned...
Written by Bryan Kolesar at Wednesday, January 31, 2007