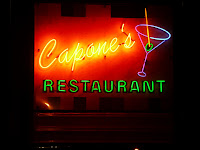 Anyway, back to topic. This isn't so much about Capone's as it is about East End Brewing. They debuted a couple of years ago and I haven't been able to get my hands on any of it. I was on the fence about going to Capone's last night, but the inclusion of East End sealed the deal. 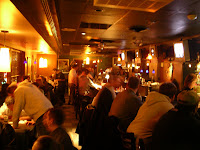 I finally got to savor what I've been longing for. And, boy, did it not fail to disappoint! Maybe it was because I knew what to expect from Pliny and perhaps it was because the Elder came out somewhat under-carbonated and lacking some of the flavorful hop punch that I recall from previous tastings.

So it seems that the future holds for me a visit to the brewery, some growler fillups, and a full-fledged review of what's going on out there at this up-and-coming brewery in da 'burgh. Oh, and by the way, they're another one of those responsible breweries with the whole environmental-friendly approach. Kudos to Scott and all of his volunteers!

Bryan, I would strongly suggest that you attend the State College Beer Expo next year so you can really enjoy Scott's brews and meet him as well. Both his Big Hop IPA and his Blackstrap Sout have been available both on CO2 and cask. The cask-conditioned version of both these beers is simply outrageous.

This year's attendance will be number 10 for me. Hope to see you there.

Thanks! Over the years, I've gathered that this festival has a well-earned reputation as one of the best. I've looked into going in the past, and it's just never worked out.

Now, with your comments about East End, that could be all it takes to get me there finally!

I think its time to expand Westward!

That settles it...NO MORE RUSSIAN RIVER FOR PA! Ever!

Scott Smith @ East End is a dude. Helluva nice guy, great brewer and a one man machine keeping his own website active and alive...daily. All the while making beer!

Well, a bit off topic, but you'll have to endure our glowing (I'm sure) reviews of the upcoming Russian River dinner at Monk's on Tuesday. I get a feeling the brews on that night will be spot-on! Vinnie and Natalie will be on hand too.

If you haven't before, you should really get yourself to a Monk's beer dinner. They're quite the event and I'm sure you wouldn't leave disappointed.

Vinnie e-mailed me last night and it's cancelled. Sorry.

Hey, put me down for a bit of that Pliny as well! I probably haven't had any since the Chicago RAF... was it nearly 5 years ago?

Thanks for the nice comments everyone. Hope to see you soon, eith er here at the brewery or at the SCBrew Expo... one of my favorites of the year!