Rich Wagner, Yards Brewing, and bit of This 'n' That 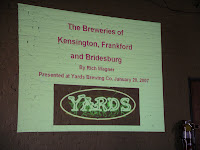 Just another day in Philadelphia beer paradise. Take Yards the "city's brewery", open the doors for tours (as they do every Saturday), throw in a Rich Wagner presentation (preeminent Philadelphia Beer Historian) and you've got the makings of reason #6254 why the Philadelphia region is one of this country's leading beer destinations.

warning: this is my scatter shot approach today!

I'm not sure if I was surprised, or not, to see a fairly well-packed room of 100 or so better beer enthusiasts...or people with nothing better to do...nah, no one searches out Kensington's Yards 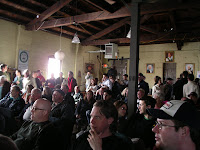 Brewing unless they know exactly what they're looking for. Oh, and for a quick sidebar (did I mention scatter shot?!), Yards was serving up Château Kenso '07 the recently released brainstorm of the brewers. Oh yeah, and I saw John Rehm for a few minutes too. Since relocating to Yards from John Harvard's Brew House (Wayne, PA), he has been able to more comfortably unleash his inner brewer. Good to see you again John in a great brewing environment. 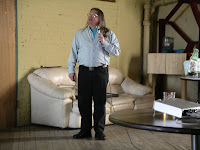 Why was I there anyway? Oh yeah, Rich Wagner's presentation. His reputation certainly precedes him; all you need do is check out his website to get a flavor for just how detail-oriented Rich is when it comes to collecting data and information about the role that history has played in bringing the Philadelphia beer scene to where it is today. If you know me, I'm sure you know that I appreciate letting my geek side out every once and a while...so the more details and numbers, the better :)

Rich conducts many speaking appearances. This one was entitled "Breweries of Kensington, Richmond & Bridesburg." (His next one scheduled at Yards is February 24th at 2:00pm and entitled "Lager Origins in Philadelphia.") This was the first of his presentations that I've attended. Rich has an engaging speaking style, making it easy to follow along with his presentation. Hey, and having a Pynk, Pale Ale, ESA, or C.K.7 fresh from the tap helps settle the crowd in for the 45 minute presentation! 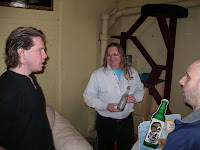 His slides are intriguing and serve as a great backdrop for his stories. He has come in to so many interesting city street maps, brewery floor plans, topological and architectural renderings, postcards, advertising memorabilia, and on and on. I was tempted to take pictures of the slides as they were flashed up on the wall, but thought better of it. You'll just have to check it out for yourself sometime.

What else can I tell you? It certainly was a good time with travelling beer hounds Mark, Everett, and Woody there to provide extra camaraderie. We parted ways as they headed across the street to check out the bar across the street ("The Lost Bar"?) with the Yards sign emblazoning the window while I headed down to Foodery II for some goodies before hitting the road back home. Just another day... 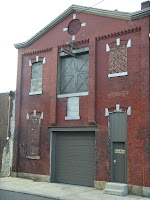