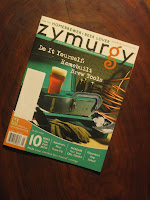 The most recent issue of Zymurgy reminded me how much I enjoy this magazine. In this post I give a brief over view of the current issue and how I learned about the monthly magazine Zymurgy.

I was searching the internet for brewing stuff last summer and I came across Zymurgy. Now this isn't the first time I've seen this magazine. You might remember this story I wrote about how I started homebrewing. Frank from the story gave my Dad a bunch of Zymurgy magazines and he in turn passed them on to me. Armed with The New Complete Joy of Hombrewing and these magazines I began brewing my own beer. I still refer to them from time to time. Anyway, as was searching for beer stuff I decided to check out the American Homebrewers Association membership benefits. Well it turns out that a subscription to Zymurgy was included in the membership. That was just the push I needed to join the AHA. I have a real card and everything ;-)

Its a practical magazine with good solid helpful hints. This month is a prime example. They feature homebuilt brew tools. The projects include making a wort chiller, yeast stirplate, walk-in cooler, bottle filler, small kegging system, carboy drier, sanitizer/storage box for long items and carbonation cap. Some are very involved projects. Others like the carboy drier are much easier and could prove to be useful right away.

Each issue contains articles submitted by familiar beer industry writers. This month Stan Hieronymous author of Brew Like a Monk and Appelation Beer gave an account of the Pro-Am competition at the GABF. Charlie Papazian, president of the Brewers Association, also has something to say. He speaks to beer style guidelines and their relevance to homebrewers and professional brewers.