Brewing Beer: I did it again. 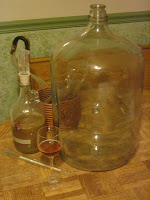 I did two things again actually. First, I brewed again last night. Second, well I'll get to that later. I don't want to talk about it right now. Back to the brewing. I had to. The California Ale yeast that I saved from the Green Hopped California Style Pale Ale (what? you want a shorter name? Ok, batch0001) was doing its thing in the starter I made. I couldn't just let a perfectly good starter go to waste. I also saved myself a few bucks by not buying yeast again.

What a perfect night. Weather was warm and sunny. My wife was out (easier to mess up the kitchen), the kids were playing in the yard and I put up some water to boil. Nothing better than some last minute brewing. Well, this one was kinda planned as an option, but, I didn't expect the yeast to revive. Hopefully it will be strong enough to get the fermentation rolling.

Again I didn't have any steeping grains so I just went all extract with some DME, light LME and amber LME. Hops? Can you say Cascade? I didn't have anything but, so this ought to be interesting. Never brewed an all Cascade batch before.

Hey on a side note, I downloaded Beer Smith. Pretty cool. I put my meager inventory in there and used it to formulate my recipes which wasn't very hard. It calculates IBU, ABV, IQ and DNA...er well you get the point. There is more to this program than I need right now, but, it seems like it would make it easier to become an advance brewer. Anyway, I didn't buy it yet. I have 20+ days left on my trial. I think it only costs 20 dollars. We'll see.

So I have a Strong California Style Cascade Amber Ale and a Strong German Style Ale in the works. Speaking of which, you'll never guess what I did...again. I blew the airlock off the German Ale fermenter again. Sounds cool, but, mostly it isn't that glamorous. I have a short video of the vigorous fermentation in action that I'll post. If it makes you feel any better, you'll be pleased to hear that I have a much better blow off tube setup for the carboy now. Shouldn't have a problem next time. (Of course there will be less to write about now.) By the way if you have the opportunity to buy the bigger carboy (7 gallons I think) go for it. That is what I'm using for the SCCAA (what!? would you like me to call it Batch 0002 or something like Amber's Best Shot?). The larger carboy gives me more head space for the krausen.

We're brewing up a storm here at TBL.

Hay, I've already laid claim to Batch0001, you're going to have to come up with something else.

Sounds like a tasty beer, the warmer weather always has me reaching for the Pale Ales.

I have yet to try Beer Smith, but I have a spreadsheet that I started out using as a way to adjust recipes for my efficiency and it grew into a monster. I can work it so that's good, but it's a little wacky to explain.

How is Beer Smith?

Travis, I really like it. It is a small download so give it a try. I'm a spreadsheet maniac too, but, I tend to waste too much time fiddling and not enough time brewing. I think I'm gonna buy it. I'll let you know after I brew a bunch more batches.

Now this only proves that I can be as geeky as all of you too! But, is that a binary reference in your coding, Adam?

So, I have to explicitly admit my geekiness now? Yes :-|