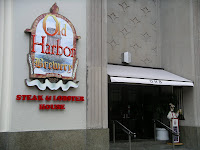 A few stray bits of information about Old Harbor Brewery came out of our most recent trip to Puerto Rico. As I'd mentioned last year after our first visit, there isn't much happening on the island as far as good beer goes. The only mass-produced beer that I come remotely close to caring for is Presidente from neighboring Dominican Republic. 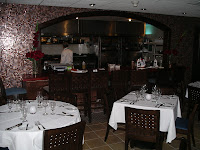 But, in Old San Juan, the Old Harbor Brewery Steak & Lobster House continues to put out a handful of decent beers that are certainly worth searching out when touring around Old San Juan. Last year, we met up with Head Brewer Brad Mortensen, formerly of Legend Brewing in Richmond, Virginia. It was quite a treat discussing one of my favorite American Browns that he brewed while at Legend and getting his insights on brewing in the Caribbean. So, it goes without saying that I was looking forward to a return visit this year. It didn't take long to learn that Brad has moved on to a new brewing job in Louisiana, though our waitress, Natasha, did not know exactly where. 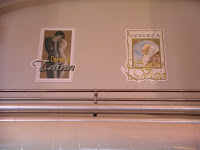 Life, and brewing, goes on and we dipped into the Pale Ale, Kofresi Stout, and Taina. The first two are part of their regular lineup, while the Taina is a seasonal that was nearing its end to make way for the upcoming wheat. While the Pale Ale and Stout lived up to expectations and were very well done, the Taina impressed even more as a solid brown ale that delivered a wonderful malty drinking experience. 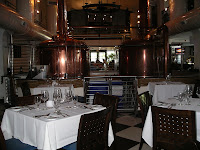 According to Natasha, the brewpub continues to do good business and are gaining popularity on the island amongst both natives and tourists alike. She further went on to tell the back story of the Taina and the role of the Taino people in Puerto Rican history. I decided against showing you all a picture of Natasha, quite the Puerto Rican beauty. Not only did she very ably describe the differences in the variety of beers but could also describe the grain mill, the mash tun, and the lauter tun. If you find yourself in Old San Juan, head on over to Old Harbor. You'll get great service and beer.
Written by Bryan Kolesar at Tuesday, May 22, 2007

I used to travel to Puerto Rico quite a bit from 1999 to 2002 for business. During that time there was the Borinquen Grill & Brewing Co. at 4800 Isle Verde Ave (closer to the airport side of San Juan). I'm not sure if its still there as I couldn't find it on Google. Anyway, I'm glad to see that there's a new brewery there if I should ever get back.

We tried to check out Borinquen (since BA still listed it as open) last year when we were in PR. Couldn't find it and the folks at the hotel and at Old Harbor both said it had closed...got the impression that it suffered from poor location (for tourists) and a product that the locals didn't latch on to.

Definitely worth checking out Old Harbor when in Old San Juan if you should get back to PR soon.

Thanks for the note.