The Session Summer of Love at Ortino's; Are You Feelin' It? 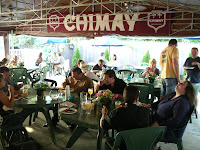 The Session Summer Love Project is underway and 'Great' let it be decreed! Too bad you weren't there to experience it yourself. You say you like our beer calendar here at The Brew Lounge. You'll go to Monk's on a Tuesday night for dinner, Capone's on a Wednesday night for their events, and you'll take trains planes and automobiles to travel this planet in search of great beer. So, what happens when we tell you that there's a great beer event at Ortino's. Where were you? Sitting on your couch eating pop-tarts for dinner watching Crocheting With The Stars is no excuse. What? You don't believe me? Perhaps if you had read the New York Times on Sunday, that would have convinced you? 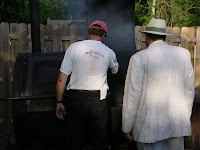 On one hand, I'd like to just tell you that you missed a great night. But, that would be too easy. Instead, I'll tell you how you missed a great social event with beer lovers who came out on a perfect night to drink and talk beer with Lew Bryson, Gordon Grubb, John Ortino, Dan Bengel, and others. How you missed a full (full, I said) 4-course barbecue dinner. And, the main course was not just a half-chicken, but also included ribs...all off Mr. Ortino's famed smoker. Oops, before that was a bowl of around a dozen or so clams in Legacy's Midnight Wit. Then, to top things off, how about berry tacos for dessert? Fresh cream, blueberries, and strawberries. 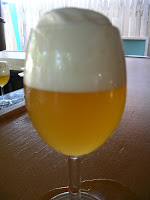 Let's back up and run through the beer selections. Getting things started was Stoudt's reliable Weizen. How's the foam for a perfectly poured beer, eh? (Sarah rocks!) Then, we moved on to the new kid on the block, Union Barrel Works, and their Kolsch which was served with the tortilla chips and variety of salsas. I sssttttiiiillll haven't made the trip out the turnpike to visit UBW, so I welcomed the chance to dip into Tom Rupp's new creations. (The trip is coming very soon, I predict.) Then, with the steamed clams came one of my perennial favorites, Allagash White. This pairing was a slam-dunk winner. 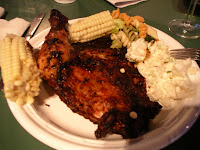 Somewhere between the clams and dessert, while I was slopping myself up with barbecue, came the Wheat Hop from East End (Pittsburgh's fast-rising darling) and Nodding Head's/Gordon's award-winning (Ich Bin Ein) Berliner Weisse. These two deserve special mention. The Berliner Weisse has been around for a while. Gordon mentioned he sold roughly 50 bbls of it last year and plans to brew it throughout the summer this year. He just returned from Brooklyn with 40 (cases, or bottles, my memory fails me) of the woodruff syrup which they offer up to their customers and with which the beer was served at Ortino's. Also, according to Gordon, he believes that Nodding Head is producing the most of this style outside of Germany. Not too shabby, I'd say.

Then, the wheat hop....yes, the wheat hop. What an interesting beer. Haven't we been conditioned to believe that with a mouth-puckering hop blast comes a high alcohol, high gravity beer? Of course, right? Wrrrrroonngggggg! Scott out at East End has brewed up a 4% ABV pale wheat beer. This is evident in the lightweight texture and appearance of the beer. So, it's a nice pleasant drinking beer. Yup, thinking good thirst-quenching summer beer. Then, pow, there's a blast of nice hop flavor but not too bitter, not too anything. Just a nicely-made great summer beer...better getchya some! 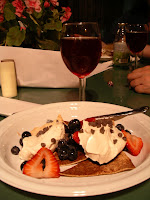 To wrap with the dessert was the Oud Beersel Framboise. As Lew described it, this is one of the last kegs in the U.S. as production of this beer has stopped. This turned out to be the big (non-session, you might say?) beer of the night. Weighing in, deceptively, at 6% ABV the raspberries jumped right out of the glass of this nicely made framboise. Just a bit of tartness to keep all things good and in balance with the sweet dessert plate. Great finishes are made of such things as these. 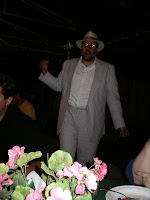 And, guess what? Any minimal buzz that I thought I was beginning to feel was certainly gone by the time I went to drive home. So, let's review. Three hours of quality beer time with beer writer, brewer, and all around good people. Quality, low-alcohol beer. Plenty of delectable food. I'm not sure what's wrong with this picture. Oh, right, you weren't there. But, don't think I was disappointed. Because with the smaller group came a relaxed atmosphere with plenty of eats and drinks for all.

Okay, perhaps I'm being a bit hard on you all here. After all, you may be planning to go to the second installment tonight at Ortino's. Tonight will feature four cask-conditioned beers (2 from Nodding Head, 1 from Legacy, and 1 from Iron Hill). It's pay as you go for all you cheapies out there.

Or, you may be planning to go on Saturday afternoon for the granddaddy of all Session Beer, uh, sessions. Over 20 of these full flavored, easy drinking thirst quenchers will be on tap for your pleasure. Also, pay as you go.

If you really are in the Philly area all weekend long and still don't make your way to Ortino's for at least one of these fine events...then, for your penance, you are hereby ordered to recite 5 Reinheitsgebots, grab a session beer, and try harder next time.

Check back later today when I might be in a nicer mood.
Written by Bryan Kolesar at Friday, May 25, 2007

I'll be there tonight!

Here's a map of where it's at. It might not be exact, but, close enough for government work ;-)

And don't forget the samples we had in between of Yards and Shipyard. So for 40$ all I got was 8 beers, enough food to fill up a football team, and a lot of fun outside. Man, I was ripped off. See you all tonight!

Ah, that's right....the sexy sister. Very nice, will be on the lookout for it in the City.

Unfortunately, I didn't grab any of the Chamberlain.

Leave it up to Lew to supply the sexy. sheesh