The Session Summer of Love at Ortino's; Saturday Highlights 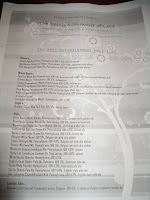 I'm sure it was my stern admonishment last week that roused you all from your couches and over to Ortino's Northside in Zieglerville, PA for their 3-day Session Summer of Love event. It was great to see so many familiar faces during Saturday's blowout of close to 30 kegs and cask-conditioned summer beauts.

And, what an event it was. NO, there were no wine-barrel fermented concoctions. NO, there were no insanely-hopped IBU-busting ales. NO, there were no vertical aged tastings. NO, there were not whiskey- or wood-infused brews. That's not what this was all about. And, if that kept you away, then shame on you. Because, what was rolled out during these 3 days was a list of low alcohol, yet flavor-full, delights. What the crew at Ortino's managed to pull off was a support of Lew Bryson's crusade to bring attention to this as-of-late neglected end of the beer spectrum.

By the time all was said and done on Saturday, I'd done my share of sampling much of the list. From my perspective, the newest and most interesting beers included Oud Beersel's Framboise, East End's Fat Gary Nut Brown, Rock Bottom's Czech Mate Pils, and Nodding Head's Prudence Pale (cask). Not quite as new to me, but still just as much fun, were General Lafayette's Churchill Mild, Nodding Head's Berliner Weisse, and Church Brew's Pious Monk Dunkel.

Somewhere in the midst of all this great beer fun was a cookoff between Legacy's and Scott BaverOrtino's John Ortino. The natives who arrived early were getting a bit restless waiting for the release of all the smoked meats and accompaniments around 5pm. I think I noticed the drinking had even slowed down in anticipation of the meal...or maybe not. Well, apparently the preparation and smoking began the night before, with Scott only staying a few miles away for the night. And, the wait certainly paid off. 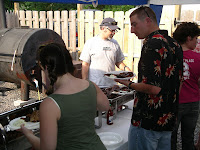 The end result? One word...wow! I thought that the Thursday night dinner was a treat...and it was. But, something in the competition must have brought out the best in both Scott's and John's cooking. I'm not too proud to say that I took care of two (filled) plates of food, that's how good it all was. All the major meat groups were represented. Chicken, beef, pork prepared in a variety of ways (ribs, brisket, pulled) with different accompanying sauces. Who won? Well, the voting never "officially" took place. Unofficial speculation claims that the 'away team' took home the fan favorite award, but who knows for sure. Honestly, it didn't really matter to all of us who turned out to be the realy winner on the receiving end of the great food, beer, friends, and atmosphere. 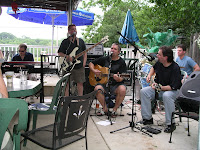 To make the day even more interesting, during Liquid Fringe's rocking set (sorry Sarah, you didn't rock on Saturday like these guys did. You'll just have to settle for beautiful and intelligent.....who was it that said those words....hmmm?) the thunderstorms rolled in and John and company sprung into action securing the patio. Now, if I only had the picture of Scott firing up and riding his bike off into the distance, literally right off the back patio, that would be a picture to have.

Well, I'm not feeling very literate today and need to get ready for the Monday Night Tasting Session of not-so-session beers. Plus, just read what Dan wrote over here or Jack over there if you need some other opinions of how great this 3-day event really was. Here are a few extra pictures. 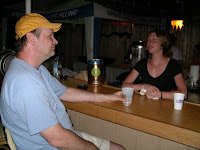 Sarah tries to convince Dan that while tap handles may lie, bartenders never do. 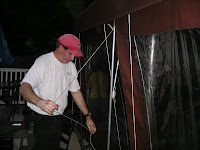 John battens down the hatches with the thunderstorm clouds rolling through. 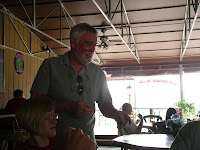 Jack made an appearance. Interesting, though, how his "blonde from the train" showed up later...but only after Lew had left. 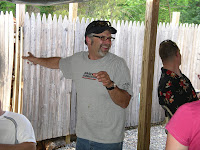 Scott talks about his barbecue and how he stayed the night before at the local Tuck 'Em In motel. 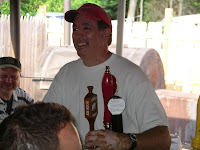