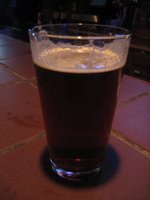 This is a red ale from Legacy Brewing in Reading, PA. This beer was sampled on draft at Flanigan's Boathouse in Malvern, PA. Legacy has created quite a stir with this beer, especially in the packaging and marketing of it. We're sure you already know what we mean by saying that.

Have you tasted this beer? Let us know what you think. As a suggestion, try to keep the review as brief as possible for each of the following: appearance; smell; taste; mouthfeel; and drinkability.

Appearance
Adam: dark amber orange with thin head of islands
Bryan: solid copper; tinge of orange; lumpy remnants of the head stick around for a while

Drinkability
Adam: nothing to stop me
Bryan: a good drinking beer; not complicated

Seconds?
Adam: yes
Bryan: just one more would be enough; not interesting enough to drink all night