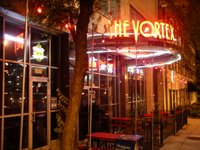 My second visit to Vortex Bar and Grill in midtown Atlanta was just as rewarding as the first. Though, since I went solo this time, I can only write about the experience with the beer and food. However, I did meet a group of conventioneers from Telecom New Zealand who shared with me their misery of New Zealand (and Australian) beer. While they were not exactly thrilled with Atlanta as a convention destination, they were overjoyed to find good beer (especially the Belgians) at Vortex. So, my first hour here was spent talking with Shea, the friendly bartender and my second hour was spent rollicking with the conventioneers from "Down Under." The first time to Vortex was thanks to our good friends Karen and Mike when we visited Atlanta for St. Patrick's Day 2005. Previously, I had not ventured up Peachtree into Midtown. It appears as though the past several years have been good to Midtown. I would presume that much of Atlanta benefited from the Summer Olympics in 1996, but Midtown appears to really have grown up with residential, culture, dining, and nightlife options. 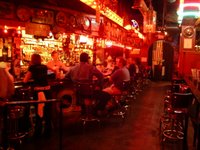 Vortex is approximately two blocks from the Midtown stop on Marta's North-South train line. They are also just a short walk from Atlanta's version of Gordon Biersch, if you are in the mood for that sort of thing. So, if you were on an extended layover at the Atlanta airport, you feasibly could take the train from the airport north to Midtown, select a couple of quality beers, maybe have a bite to eat, and be back to the airport for your connecting flight. I'd probably put the required time at about four hours. (25 minute train ride; 90 minutes at Vortex; 25 minute train ride; 60 minutes to spare for security, etc. at the airport) But, let me say that you must have real issues if you attempt this. Not that I would try it myself, you know, it's just an idea. Hm ;-) 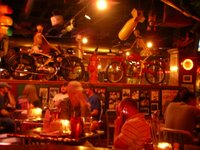 Anyway, back to the subject at hand. If you comb through Vortex's website, you will notice they project a real attitude. A cool attitude. An attitude that doesn't take any crap. They serve good food and very good beer in a fun, easy-going atmosphere. When there, all you need to do is take a look around at the decor on the walls and it will give you an idea of what they are trying to do. Though, I do miss the pole and cage for dancing that they used to have at the corner of the bar ;-) 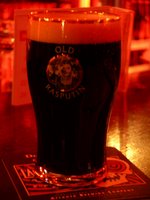 Then you take a look at the menu. You see the local brews like Sweetwater 420 and Terrapin Rye. Then you see beers that hail from some of this country's finest breweries from the northeast to the west coast. But, don't stop there. Continue across the ocean and the list will bring you some of England's, Germany's, and Belgium's finest brews. My excellent selections included Sweetwater 420 (extra pale ale), North Coast Russian Imperial Stout (couldn't resist just one more before the end of the season), and the Anchor Old Foghorn barleywine (still fresh in my mind from the San Francisco brewery visit I made in the previous month). 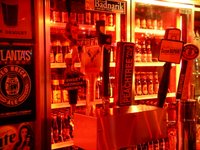 Both times that I have been there, the service has been just right. They are friendly and knowledgeable about the beer, but not overbearing. They are courteous and outgoing without overreaching. The jukebox has good tunes to fill the air (even some Springsteen for this northeast guy!) Oh, and when you are cruising the menu for some food, do not be afraid of the Cuban Black Bean Spread. I know it sounds weird. Basically, it's cream cheese, black beans, hot salsa/sauce, and pita bread, it's phenomenal, and highly recommended! And, one last note. If you happen to be in Atlanta and want to check out the Vortex, make sure that you call both locations and see what's going on. What information do I come across just the following night while I'm at the Brick Store Pub??? Oh, nothing really....except that the other location of Vortex at Five Points was having a "fire sale" on many Belgian bottles while I toiled away at the Midtown location!!! Why, who knows?! But, they were reportedly getting rid of them for just a few dollars a bottle. Grrrr....
Click Here For All Brew Pub & Beer Bar Reviews
Written by Bryan Kolesar at Wednesday, May 03, 2006

wouldn't eat here again if my life depended on it. A few of my friends and I decided to try Vortex to celebrate a birthday. The waiter was very sarcastic and rude when we asked about items on the menu. We asked for separate checks and we were told it would be no problem. When the bill came, not only did we receive only one check, but the waiter decided to slap an 18% gratiuty on the check for himself since it was six people although his service was horrible. Seeing that we didn't think he was worthy of an 18% tip, we asked for and spoke with the manager who told us that the tip was required and that he would call the cops on us if we didn't pay the tip. IT was RIDICULOUS!!! We proceeded to pay because we didn't want to ruin the birthday celebration. The manager took the money and the waiter very rudely said, "It better all be here." DON'T EAT HERE UNLESS YOU ARE OKAY WITH PAYING FOR HORRIBLE SERVICE.