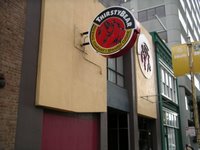 Lions and Tigers and Bears, oh my! Well in this case there were only bears....thirsty bears that is. Thirsty Bear Brewing Co. was not on my original list of San Francisco beer destinations. But, while at 21st Amendment, I was advised that on my walk back to the hotel, I should check out Thirsty Bear. It was at 21st Amendment that I received my San Francisco Brewers Guild map, on which Thirsty Bear was listed. So I figured 'what the heck', it was now on the list. According to the World Beer Cup, they also had a couple of award-winning brews in the past. On approach to TB, you definitely do not get a cozy neighborhood feel. As I walked down Howard Street, a quite wide thoroughfare, I came upon the brewpub, which from the outside is in a nondescript building just a block from the Moscone Convention Center. Once inside, I was awed a bit by the size and design. I am not sure that I've ever been in a brewpub quite like this one. The front of the space has a nice and comfortable lounge area with heavy drapes hanging from the high ceilings to the floor. You certainly get a trendy feeling of plushness as you walk through the different areas of the restaurant and bar. The long bar opens up in front of you as walk farther back, with the 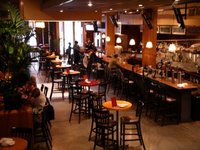 brewing operations set up behind the bar. The patrons can walk behind the bar to see some of the brewing action. Though, during this particular visit, there was practically no action of which to speak. On one hand, this is nice because I can focus strictly on the beer and checking things out around the brewpub. However, it can also present some other challenges in doing a comprehensive review. For starters, it's difficult to get a real sense of the type of crowd, the popularity of the beer, and the overall excitement for the place. Plus, the staff tends to fall down a bit in their service level during off-peak hours. But, putting aside the nonexistent service, I was able to focus on the beers and the food. 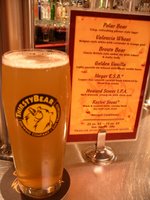 In this visit of firsts, it was also the first Spanish-based brewpub for me. Their website claims to be the first U.S. brewpub "to serve an authentic Spanish menu." In any case, I did not sample any food, but a quick scan of the food menu left me with a favorable impression of their creativity. On the beer side of things, I was mildly impressed but not overwhelmed. I sampled the Belgian-style Valencia Wheat (one of their usual suspects, among several) and the Scottish Ale (a specialty one-time brew). The Wheat was very nicely balanced with modest, but not overly full, flavors of refreshing citrus. I tried the Scottish Ale primarily because I was intrigued to find what should have been a mouthful of rich malt in this great State of double and triple IPAs. I was a bit disappointed in a lighter style Scottish Ale than I might have expected. Also, interesting to note is that, like 21st Amendment, Thirsty Bear has a weekly cask night when they roll out a specialty cask and tap it until it is gone. It's nice to see this trend catching on at more and more bars/brewpubs. I started by mentioning the sheer size of this place. When you make your way to the restrooms, you get the chance to see the remainder of the bar and restaurant. The restrooms are upstairs where you will find even more bar and dining areas, a private party room, darts, and a pool table. Judging from the trendy design, the creative menu, and the size of the location, I get a feeling that TB probably gets quite crowded and rocking on certain nights. In my mind, it was difficult to fully assess and will require a return trip. p.s. Mark, did I get your attention with the opening sentence? You know it will be a review worth reading when I start with a Wizard of Oz reference, eh?!
Click Here For All Brew Pub & Beer Bar Reviews
Written by Bryan Kolesar at Thursday, May 04, 2006