Nothing smokes more than Music, BBQ, and Beer at Bo's BBQ in Lafayette, CA

Now that Philly Beer Week is officially over, I can resume some of my missing California chronicles.

Bo McSwine knows BBQ. Have I said this before? Most likely. But it's always worth saying again. When in the Bay Area, make sure you either take a drive or the Pittsburg BART line east to Lafayette for dinner, beers, and live music at Bo's BBQ. This is just what I did again on this most recent trip. Though most of our beer events were centered on San Francisco, Oakland, and Berkeley, I took the time to introduce Patty to Bo's for the first time. We went with her sister and brother-in-law and a couple of their friends. 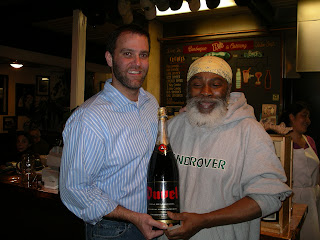 I'd be redundant to again describe the beer selection and the non-vegetarian food choices. Just check back here for comments from previous comments. Also, Joy the Restaurant Whore does a wonderful job describing similar highlights from a visit to Bo's and the SF Chronicle has a nice review/biography from a few years ago as well.

What made this trip stand out was when my brother-in-law, Mike, insisted that we speak with Bo. He looked relaxed enough for a conversation so we engaged him for 15 minutes or so. I was impressed by not only his handle on beer, wine, food, and the restaurant industry, but likewise his passion and concern for arts, culture, children, education, family, and general community matters. 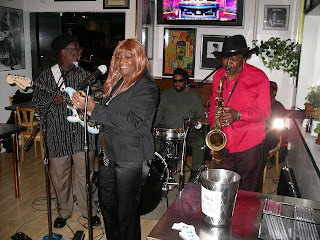 What also stood out was the phenomenal soulful sounds of The Black Diamond Band with Layce Baker. So much so that I picked up a CD of theirs for enjoyment at home and on the road. Oh, and someone else, I won't say whom and fortunately for this person I don't have any pictures, enjoyed the night so much that they made a Port Brewing Old Viscosity look like a great chugging beer...straight from the bottle...just saying :)
Written by Bryan Kolesar at Thursday, March 27, 2008