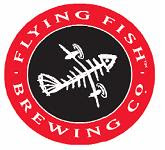 They can be forgiven for locating across the river on "the other side", but it doesn't mean that they are any less a part of the Philly Beer Scene than other places that I've given you the rundown on so far. In fact, in some ways they can be more so.

Around town, it's not all that difficult to spot the ESB, XPA, and Dubbel regularly on tap. And when you're extra lucky, you'll find the Grand Cru, Porter, and HopFish. Some of these will wind up cask conditioned on any given night or perhaps at a special event like Friday the Firkenteenth at Grey Lodge.

With these beers readily available on tap and by the bottle, and Casey ready at the bat to rip up the town, they're representing New Jersey practically by themselves....and doin' it well.

As you ready yourself for Philly Beer Week 2008, study up on some background notes on Flying Fish and consider yourself lucky to be part of such a vibrant and rich beer region that PBW 2008 will celebrate.

Great summary of the Fish!

Casey, that Modern Day Bard of Beer, and Apple Jack Grand Cru will be at The Grey Lodge Pub for Beware the Ides of March on Saturday the 15th, at 9pm, which is after the Michael Jackson tasting.