Background: Several things looked like fun to do; grabbed our friend, "The Blonde", and hopped the train yet again into the city. 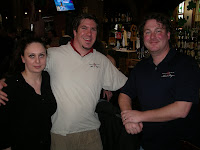 Where to: Stuck to "the plan." Train to Bridgewater's for Southampton tasting, subway (El) to The Khyber for Pogues and great beer and Triumph for Lew's Lagers, continue on the El to Johnny Brenda's for the Beer Geek championships. 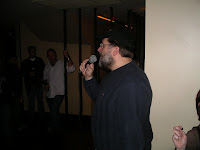 Why: Bridgewater's is becoming my "duh!" bar. As in, if you're travelling through 30th Street Station in Philly, duh!, why wouldn't you stop in for a quick drink and/or a bite at Bridgewater's. As I've said before, I'm no travel expert, but in my travels this is one of the premier spots in transportation hubs for food and drink.

The Khyber? Their beer selections have continued to improve and impress over the years. With their no-nonsense atmosphere, and great music too, it's on the short list of must-stops to make while in the Old City neighborhood. On this Day 7, they were offering up two hours of Pogues music to go with the beer specials. Since we couldn't possibly fit in the real, live concert (complete with Shane McGowan) at the Electric Factory, this was a great substitute.

Triumph offered up their tasty and well-done lager styles along with guest lagers from Appalachian, Sly Fox, Stoudt's, Victory, and beyond. And, with Lew working the crowd spreading his message of well made lagers and session beers, this was high on my list of things to do. Plus, with a pay as you go arrangement of $4 pints across the board, that was part of the appeal as well. 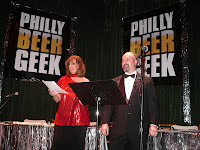 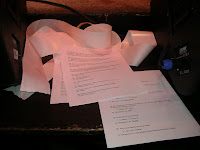 But, highest on the list was the Beer Geek Championships at Johnny Brenda's. After passing JB's numerous times in the past, this was finally (FINALLY, I say) my first stop in at this great (GREAT, I say!) neighborhood Philly bar. This is exactly what other cities off the eastern seaboard (northeast, particularly) can not replicate. Denver, Seattle, Los Angeles? Find me a bar with as much character as Johnny Brenda's delivers. From the downstairs restaurant to the upstairs stage and balcony, this is a great venue for food, drink, and music. It represents a lot of what makes pub drinking in Philadelphia unbelievably great.

But, on this night, it was about the beer geeks and what they think they know. A stage full of worthy contestants came out, including our Monday Night Tasting pal Dell, and put their knowledge to the test of the celebrity beer judges that came from local haunts and across the country to bestow the title of first ever Philly Beer Geek Champion. Methinks I'll be returning very soon to do a full review. 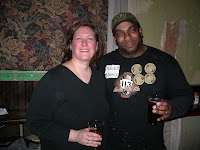 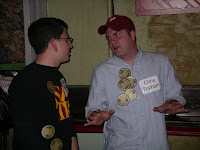 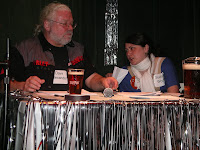 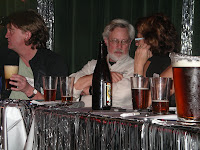 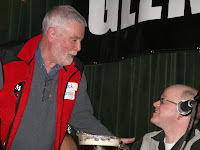 Who to share a drink with: Spencer from Southampton, Peter from Stockertown, and Beante of Bridgewater's during the Southampton tasting. Great to meet Spencer and especially for Kathleen (Long Islander native) to talk about her visit to the brewery last year with him.

Family and friends (group of about eight, or so) met up with us at The Khyber and moved along with us to Triumph and Johnny Brenda's. Didn't run into anyone I knew at The Khyber, but a lot of familiar faces were bouncing around at Triumph (Scoats, The Other Ortino, Jay and Patrick, Ron Barcet and Victory stalwarts Richard and Rick).

Johnny Brenda's didn't pack 'em to the rafters like I expected should happen. But, there was a comfortably-packed crowd of supporters including J.C.'s "driver" Corey from Sly Fox, Sean (and Mo, right?) from The Foodery, hosts/emcees Carolyn Smagalski (the Beer Fox) and Jason Harris (Keystone Homebrew Supply), along with the panel of celebrity judges (Dave Alexander, Tom Dalldorf, Jack Curtin, Larry Horwitz, Suzanne Woods, Carol Stoudt, Bruce Williams, Tom Kehoe) 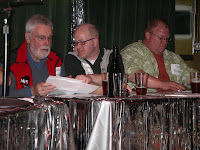 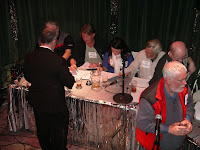 Reaction: I'd like to talk about how the Rolling Boil Band brought the house down and who the final round came down to. But, once again the train beckoned across town and 6am comes too early. So, we headed out after another successful night on the town.
Written by Bryan Kolesar at Friday, March 14, 2008