Background: Long day of work and a complicated doctor's visit mixed in. Weather is crap. Raining cats and dogs, and that cow from Twister too. Roads and traffic are a mess. But no worries.

Where to: I and partner in crime, Patty, will make it to Grey Lodge for some food and beer to kickoff PBW 2008. 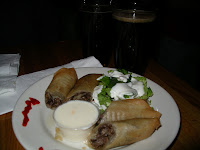 Why: Looking back on my "guidelines" for choosing PBW events, this one qualifies because I: Hung with a Different Crowd & Searched Out A New Beer. Different crowd for sure. A lot followed the big lights of Joe Sixpack (still kind of wish I stopped by there too for the "official" kickoff) and Standard Tap (the other official kickoff), but I was still able to hang out and chat with several people that I've known but not had the pleasure of seeing in quite a while. Plus, even though Sprecher will begin to be found here on a regular basis very soon, it was still fun to see it being poured from the taps at our local watering holes.

What to drink: Sprecher from the great beer state of Wisconsin is now being imported to Pennsylvania. My experiences with Sprecher before were memorable both in Wisconsin and New York City at the Collins Bar. The Black Bavarian was pouring a nicely roasted, slightly burnt, but had a smooth character that made it a very easy drinking beer. A couple worth actually, considering the 6% ABV. And the Winter Lager from the bottle was also a decent-bodied beer with nice flavor.

Also noticed that Yards Pynk and Philadelphia Brewing Wit are on tap. The Wit is a nicely subdued wit with all of the expected flavors, just not in an "imperial" way that too many breweries are trying to make their wits into. Look how nicely these two can coexist. Who would've thought otherwise?

Who to share a drink with: Well, the Mayor was not in attendance. Despite my invitation, he responded to another call. Scoats, of course, was pulling yeoman's work, but hiding out and shootin' the breeze with me. Carlosd74 of Beer Advocate fame was on his way home from work enjoying a Sprecher and a local Victory. A friend of a friend was there (the picture will test how often and how closely he reads this stuff). And, a friend of Patty's from many moons ago was there to talk of shared friends and beer. 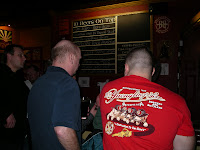 Reaction: Success! This was exactly what I was looking for on this first day of PBW 2008. Of course, I could have stopped by Standard Tap for a Sly Fox Standard (which I presume to stumble across sometime in the very near future) or Joe Sixpack's event in East Falls. But, as some of you may know, after a long week of work I don't often fair too well on Friday nights. Saturday nights tend to be my night for fightin', so a low-key event with ne'er too often found, but way excellent, Sprecher was just the order. And, check off the first of four styles of PBC beer that I expect to have over the next week. So far, so good from these guys.

The 75 minute trip on the way down? Couldda down without. The 35 minute trip home to have this last bottle of Sprecher Doppel Bock (do they make anything that sucks)? Priceless. Now to rest up for Day 2. 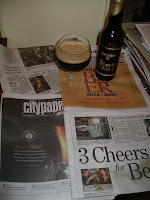