Background: After a peaceful and restful night off on Tuesday (though, I hear that I missed quite the impromptu after party at The Belgian Cafe; brewers, writers, distributors, owners descended...word spread like wildfire!), I was primed to get back into the PBW game on Wednesday. Again, plan was to take Amtrak train into the city via 30th street. (Remember my tip about Bridgewater's, right?) 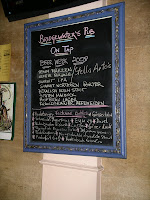 Where to: Dinner and North Coast at South Philly Tap Room (SPTR). Meet up with the Brewers Tour (aka "Kick the Sixtel"). Wound up with them on the latter part of their tour at Nodding Head (BPA); Fergie's (Nugget Nectar); and McGillin's (last stop; all beers) 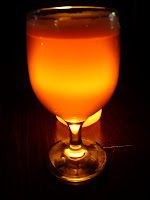 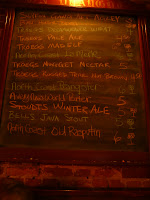 Why: North Coast has so many very fine beers, 2 of which were on CO2 (Le Merle and Pranqster) and 1 on nitro (Old Rasputin, oh baby oh yeah). Plus, the food and environment at SPTR is so very fine also (is that that the best descriptor I can find today?), I wanted to make sure that I made at least one stop here during PBW. Then, meeting up with the brewers? Well, I guess I gotta say that they're a very fine and way fun bunch, that any pub crawl with them is bound to be a blast. 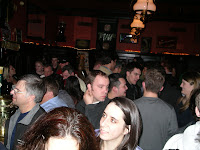 What to drink: The Old Rasputin was the extremely perfect way to finish our dinner at SPTR. Oh, and Le Merle had me calling for More, but not on this night. The atmosphere seemed only to be getting charged up when we left a little after 8pm with their Beer Nerd Quizzo about to begin. Nodding Head's BPA was such an easy, delightful drinker that I had two (hey, I had to do my thing to help kick the sixtel so we could move on!). The Nugget Nectar at Fergie's kicked so quickly that I didn't have a chance to get my own. No worries, though, since Patty and I were the first to arrive at McGillin's where we promptly ordered a Nugget Nectar and Satellite Stout (Dock Street) that we put down quickly before heading back to the train and home. Or, wait, was that a Franziskaner Hefeweizen that we had time for at Bridgewater's before the train? Yup...I mean, what would any reasonable person do on a PBW night out with 11 minutes to spare before the train?! 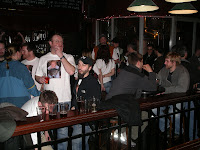 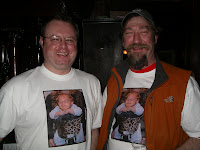 Who to share a drink with: Let's see, in the last few minutes before leaving SPTR, we ran into Sean from The Foodery (NoLib) and had a short but pleasant conversation. Too bad he wasn't there a bit earlier, but they came for the trivia. We also chatted for a few minutes with a group of very IPA-like ladies reveling in their North Coast brews. The Brewers Tour? Yikes! Let's see...(in no particular order) many local brew crews (I won't list them all, you know who they are), Buhler, Mini-Mash, Russell, Woods and ladies of IPA, Steve (aka BA 'JerseyDevil')....once again, I didn't take notes, so I'm sure there are some I'm leaving out.

Reaction: We only made it to the last three of the planned stops on The Tour. But, if these three stops were indicative of the way the other stops went, then these brewers are rock stars and can drink like it! The turnout at Nodding Head, Fergie's, and McGillin's was phenomenal; check out the pictures. With Gordo on the cowbell, this was one tightly-run pub crawl. The efficiency with which this crowd was moving through the sixtels, then the city streets, would make a German proud! 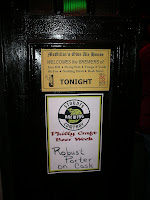 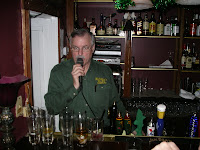 Of course, you can't tell exactly who was there specifically for the PBW event and who was there just because. For example, McGillin's had live music downstairs and quite a full house and a bunch of confused-looking conventioneers upstairs where the PBW event was being hosted. I believe that's one thing that will contribute to the difficulty of gauging the success of PBW. Not that we need to have exact numbers, some of it will turn into more of an anecdotal analysis. But, when the event does not close the establishment to the general public it becomes difficult to determine how successful the event was. For example, tastings that I've been to now at Bridgewater's and SPTR seemed to be attended more by the "typical" bar crowd for that given day/time drinking their typical drinks and it was hard to determine how many people were aware of or there for the special event or PBW. I wonder if other places, like For Pete's Sake, had similar experiences. Of course, it's not to say that the beer doesn't eventually get drunk.
Written by Bryan Kolesar at Thursday, March 13, 2008

Nice to hear about Nugget Nectar being at several other places you would not have expected it in prior years.

Nugget Nectar last night at The Khyber. Wow, how their beer selection continues to improve over the years.

(Plus, two hours of Pogues music piped in, in lieu of going to the concert at Electric Factory last night)