Background: Things really get manic here on the first weekday of PBW (not really counting last Friday...everyone was already in weekend mode). Should be a true test of the beer lovers out there to see which of the roughly 30 scheduled events will draw the most interest. Weather is bright, clear, and it should be a nice night for gallivanting the city from deep in the heart of South Philly to Center City to Art Museum/Fairmount to Old City to Northern Liberties (no, stop it now...that's not my schedule!) 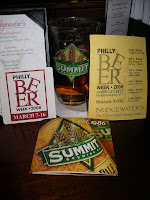 Where to: Train to 30th Street. Quick stop at Bridgewater's hoping to find a nice pull of Summit on tap. With token in hand and no passing bus, I made the refreshing walk to Fairmount's London Grill and Garrett Oliver's meatball slider event. Would have also liked to do a quick hit at Bishop's Collar, just around the corner from London, for something from Blue Point or Bridgid's for Southampton...but not enough time for that. Then, catch a bus across town for Triumph's Ultimate Beer Trivia with soon-to-be speechless Suzy and party man Johnny Goodtimes. That's about all that I can fit in before the 10:45 train takes me back home. While at Triumph, I should have picked up a ticket to the Real Ale Festival on Sunday. 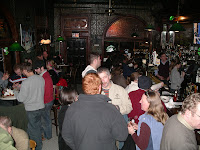 Why: A different reason for each stop. Bridgewater's because it's right there at the train station and must be one of the finest beer bars I've encountered ever at a train station or airport. Anyone putting a German Lager on in place of Yuengling Lager deserves our business. Plus, with not-found-on-draft-often-enough Summit (from Minnesota) being showcased, it was a no-brainer.

The London Grill event with Garrett Oliver also seemed like a no-brainer considering that when most of us think about beer and food pairing, we instinctively turn to his Brewmasters Table book. He wrote the book, what is it, around 5 years ago? I get a feeling that the book will consider to be excellent reference material far into the future. The concept was intriguing too, with various meatballs comprised of everything from foie gras to lamb to shrimp/lemongrass and several others as well. 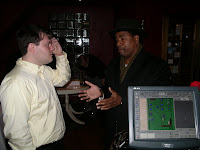 ("Close your eyes and follow your instincts while brewing")

And, Triumph? Well, the opportunity to visit Triumph, put back a couple of their excellent brews, and have some good ol' fashion gaming fun couldn't be passed up. With MC Johnny Goodtimes, the Beer Lass, Jay and Patrick, and a host of other party people in the house, it was a rollicking good time that unfortunately I could only spend around an hour at due to my 10:45 train. Sorry suburban sucker that I am.

What to drink: Summit Maibock (beautiful grain profile) and Porter (dry and roasty delight); Brooklyn Pennant (showing off its dependably good stuff), Local 1 (thanks Garrett for finding another bottle after I bragged to the table about how this is one of the best food-pairing beers out there...it handled the meatballs wonderfully), and Extra Brune (this newcomer to the Brooklyn portfolio is a pleasing and easy-drinking, but deceptively high in alcohol, Belgian brew...hope to see this around again soon, though Garrett said Pennsylvania got disproportionately more than anywhere else...yea us!); Triumph Kellerbier (a fine, fine example of a lager that I hope to have more of on Thursday night back at Triumph again) and Nuit de Folie (did I get the spelling right on this smooth sipping quadrupel?) 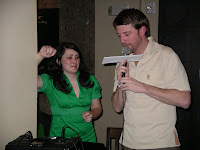 Who to share a drink with: At Bridgewater's, Chuck and Peter from Stockertown played host for Summit and Bridgewater's manager (met her for the first time, and didn't note her name...my apologies!) joined us as well to talk about the week's plans there at the pub. Over at London Grill, the joint was jumping with people tossing back meatballs and Brooklyn beers. We had the pleasure of joining Garrett at his table, along with Corey (Sly Fox) and a Center City dweller named Bill who hopefully will be checking out some Italian beers that we discussed (and if my word is not good enough for praising Italian beers, try Lew's). Also passing through the doors looking to get their meatball fix on were the siblings Buhler, Steve Mashington, Curt Decker, and a few others that my memory isn't recalling right now. (The door hinges really got a good workout.) Finally over at Triumph, where they had a very nice turn out with almost everyone holding a Quizzo sheet, Jay Misson and Patrick Jones were serving and talking beer while also offering up bonus round questions. Chris Topham (Eulogy), the Corey crew (again), Steve M (again), table mates Keith and Suzanne, and oh probably another few that I have already misplaced in my noggen (not to be confused with roggen). 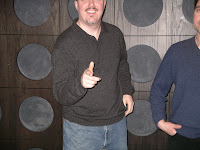 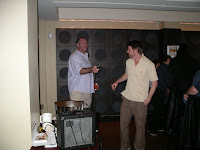 Oh yeah, and a guy named Mark. A friend and former co-worker, he now lives in Center City and has long chided me for avoiding him when I do my beer tours through the city. Hopefully, our trek from Fairmount to Old City began to make amends!

Reaction: If I could spend 5 hours doing 3 beer events again, I wouldn't change a thing. Oh, alright, maybe I'd try to squeeze in a 4th event, like a stop at Bridgid's or Bishop's Collar. But, in the end I had some decent beer from Minnesota and Brooklyn and Philadelphia, talked beer and grub in a very fine pub with Garrett, and played some trivia games while sipping on well-crafted lagers with friends. The diversity that PBW 2008 offers is exceptional! Now I believe it's time for a day off.
Written by Bryan Kolesar at Tuesday, March 11, 2008

Nice update Bryan. Sounds like you had a filling night. I was thinking about the meatball night at home last night. I had to pick up and read through the Brewmaster's Table book that you got me before we left for Europe. Thanks again for that.